She Followed Her Dreams In Spite of Hardships 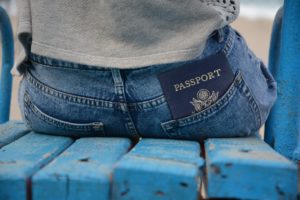 Can you imagine being uprooted from everything you’ve ever known, moved halfway across the world, and abandoned at the age of 15? Beatriz was only 13 when she moved with her father to Maine from West Africa. She enrolled in school after she arrived and spoke very little English. In time her English improved. By 15, she began to feel at home in Maine.

Around this same time, her father traveled back to Africa to visit family and left Beatriz in the care of a friend. Months passed and her father remained in Africa. Her temporary caregiver became abusive which ultimately landed Beatriz in the emergency room, at which time DHHS took custody.

After two years and multiple failed foster care placements, DHHS placed Beatriz in the care of New Beginnings’ Shelter. At first, she struggled to make progress toward the goals she established with shelter staff. She felt defeated by her lack of success and connection in her foster homes.

During her stay at the shelter, Beatriz told staff that she would never return to a foster care placement and threatened to run away if DHHS placed her again. Though staff wanted to support and keep Beatriz safe, it was clear that she was not yet ready to live independently.

Shelter staff and Beatriz discussed what goals would need to be achieved in order for her to prove that she was ready to live in the Independent Living Apartment Program (ILAP).

ILAP is a partnership between New Beginnings and DHHS to provide case management and housing support to young people who have aged out of the foster care system and still need additional support to grow into stable and healthy adults.

Focused on ILAP as a goal, and with the support of New Beginnings’ staff, Beatriz became determined to become independent. Within a matter of weeks, her whole outlook changed. She met and exceeded goals, and after an extended stay at the shelter, Beatriz was accepted into the ILAP program. But not without additional challenges.

Beatriz came to New Beginnings with no documentation except an expired passport, and while the Immigration Legal Advocacy Project was working on her immigration application for special juvenile status (due to her father abandoning her), New Beginnings’ staff had to find someone willing to rent an apartment to a 17-year-old with no social security number. And they did.

Despite Beatriz’s setbacks, she remained committed to living independently and pursuing her dreams to one day travel the world.

Over the course of the next three years, Beatriz remained part of the ILAP program. She graduated high school, enrolled in college courses, obtained her driver’s license, her green card, her social security card, and she traveled to her West African embassy in New York City to obtain a new passport.

Beatriz began working in the community and volunteered at the shelter to provide translation services for other young people from West Africa who spoke her native language and to help them feel less alone.

What’s more impressive is that in spite of the hardships she’s endured, Beatriz continued to pursue her independence and career goals.

Allie Smith, an Education Specialist at New Beginnings helped Beatriz apply for a scholarship through the Dot Larrabee Youth Development Fund (DLYDF) to attend a job training program to obtain a career in the travel industry. The DLYDF is a fund that provides aid in support of vocational and educational goals for youth involved with New Beginnings programs.

Allie shares, “What has always impressed me about Beatriz is that she is extremely confident, while also being down-to-earth, hard-working, and motivated. There are a lot of people, who if they came up against the barriers she came up against, would have said ‘it’s too much, I’m not going to try.”

Allie continues, “Beatriz had to figure out some way to communicate with estranged members of her family back in Africa to obtain identification materials, given to her in a way that an embassy here would accept them and issue her a passport. But she was so determined, and was so committed to her love of travel and knew she needed her passport to do the program. She just refused to be deterred. She decided that she was going to figure out how to get it done, and she did!”

Now 20, Beatriz obtained the scholarship and is enrolled in the job training program she dreamed of and is looking forward to a career that will allow her to see the world.

For Email Marketing you can trust.